Defeat your enemies on the battlefield Advertisement
SIEGE: Titan Wars is an RTS where you face other players online. To do so you need to use different kinds of troops and spells, which, as usual, you gradually collect in the form of trading cards.

The SIEGE: Titan Wars game system is relatively similar to that of Clash Royale and other titles of this kind. Your goal is to destroy your enemy's main tower while preventing him or her from doing the same to you. You have to deploy troops and spells on the battlefield, bearing in mind that everything is linked to a mana cost.

When you win a fight you receive chests. Inside each are cards you can use to make improvements to your current troops and spells. The higher the level of your cards, the more powerful the effects they unleash on the battle.

SIEGE: Titan Wars is a brutal, chaotic tactical duelling game that moves away from the slower rhythm of other titles of this genre in favor of a much more dynamic experience. Furthermore, the game offers stunning visuals worthy of any gaming console.
Reviewed by Andrés López Translated by Louise Hennessy
Advertisement

Requirements
Android 4.4 or above required

Why is this app published on Uptodown?
(More information) 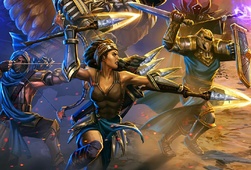 Lost Words
Guess the secret words without clues if you can
Blocky Pizzeria Five Nights
Try to survive the night in this low-poly game
KingGodCastle
Defend your castle from enemy attacks
The Simpsons: Tapped Out
Move into Springfield with America's most irreverent family
Puzzle and Dragons
Pokemon meets Puzzle Quest
Riding Extreme 3D
Hop on a bike and pedal like crazy
PokerStars NET
Watch and enjoy in this community of poker players
Merge Villa
Return this house to its former glory